Three eras down, three(ish) to go! While the Lost Galaxy–Time Force era is quite beloved by Power Rangers fans, I was turned off by every season but the last. This era, however, is much more my speed – the next two seasons are among my favorites (and, funny enough, when I stopped watching the show for good). However, this season is one I can barely stand. Intentionally or no, I picked an episode that showcases Power Rangers Wild Force‘s pros and cons in equal measure. So let’s take a look!

Among other differences, this was the first season without a cold open. Instead, the action jumped right to the intro, so let’s follow suit:

Not bad, right? Well, strap in, because they knew to start with the best this season… 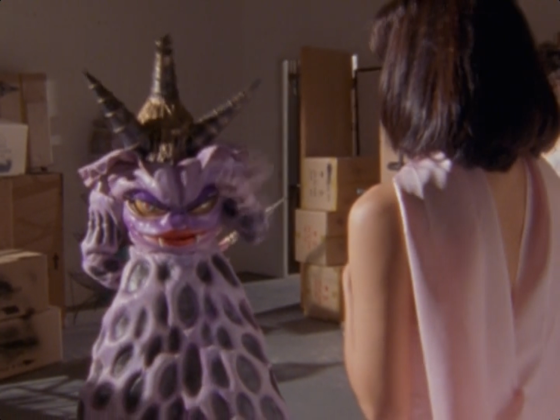 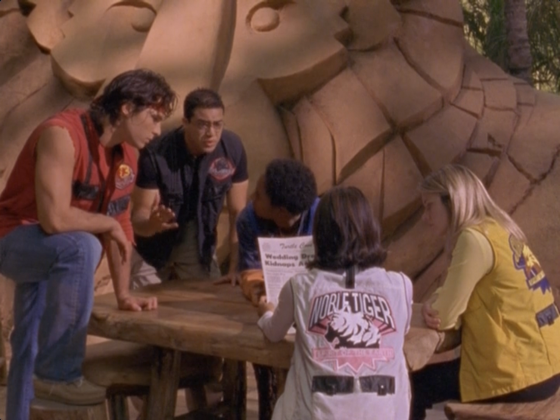 “Love is a many splendored thing! Love lifts us up where we belong! All you need is love!” – Danny
“Please, don’t start that again.” – Me

The Rangers have been making a giant mess of things (much like Taylor Swift in “Speak Now”), but the one taking it hardest is Black Ranger Danny (Jack Guzman). I’m not going to bother identifying the other Rangers, because they don’t really factor in to the episode, and they’d probably prefer their work on the show to be forgotten by history.

You see, there’s a major issue with Wild Force. The acting is terrible. Like, ter-ri-ble. There’s nothing even slightly redeemable about it. There is no QUEEN Amy Jo Johnson to keep things together. There is no gradually growing skill like in Zeo or In Space. This is just bad, all the way through. In the first two minutes of this episode, Guzman blatantly steps on a co-star’s line. And it made it into the episode. Imagine what the other takes were like.

Anyway, Danny loves love, which means Wedding Dress Org must be stopped! (The Rangers are the horrified looks from everyone in the room while the metaphorical Taylor Swift is interrupting the wedding in “Speak Now.” I’m committed to this bit, no matter how irritating it is.) 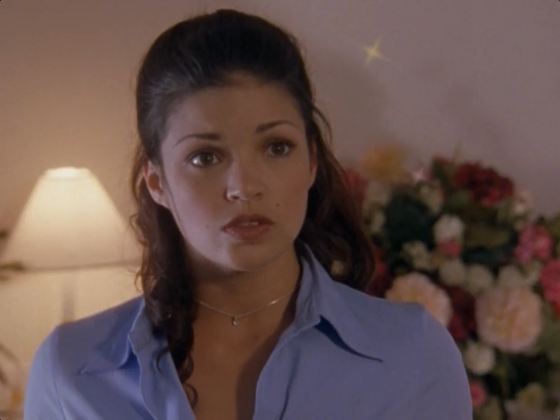 “That is a very different tuxedo you are wearing, sir.” – Kendall 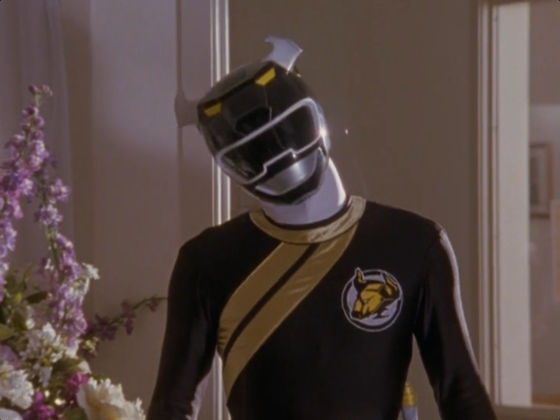 “LOVE MAKES US ACT LIKE WE ARE FOOOOLS–wait, sorry, that’s Nicole’s part.” – Danny

The Rangers chase the Wedding Dress Org into a church, where Danny runs into Kendall, his true love or crush or something, in the bride’s room. Of course, he’s morphed, so he can’t give away that he knows her. She is not concerned with the fact that he is, you know, a Power Ranger, instead asking him if he’s looking for the groom. Because, you know, reasons.

I should explain the horns. The Wild Force Rangers are based on animals, and each have living Wild Zords that correspond to their powers. Danny here is based on the bison. This is really funny considering something we see later.

“MY flowers are prettier.” – Boyfriend
“WE COULD BE HEEEEROES” – Danny

Turns out, Wedding Dress Org turns brides into mannequins! Kinky. Anyway, that’s Bride #5 the Rangers failed to save. Way to go, gang. Danny has a one-track mind and decides to go warn Kendall. He instead winds up in the wedding set-up equivalent of a penis-measuring contest with Kendall’s Boyfriend. Note that Boyfriend gets no name in the episode. Kendall also never gets a last name, but that’s slightly more forgivable.

Wedding Dress Org attacks, so Kendall and Boyfriend try to slip away while Danny stays behind to fight. But Danny, thinking they’re already gone, morphs in front of them! They’re both shocked. (It shouldn’t have. See if you can find why in the next photo.) 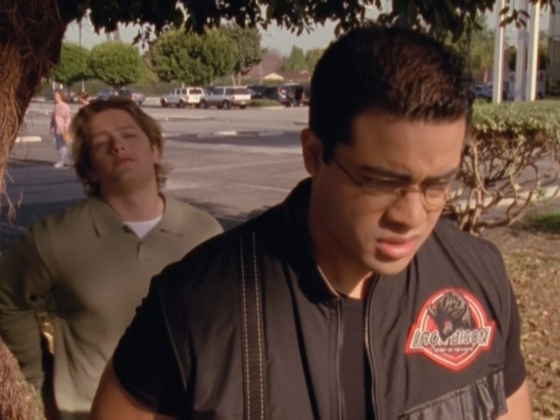 Danny leaves the Rangers again to go check on Kendall in the hospital, but Boyfriend calls him out on being a Ranger. Boyfriend actually very astutely points out that Danny can’t balance caring for Kendall while saving the world. Which, yeah. In fact, ALL the evidence in this episode indeed supports his claim. Unfortunately, that rather fascinating plot thread gets quickly tossed away for Boyfriend’s wealth-flaunting. Boring. (And poorly acted, but hey, that’s par for the course at this point.)

Look at Danny’s patch, though: Iron Bison. A black jacket. That he always wears. With the words “Iron Bison.” And these guys keep secret identities how?

Kendall is underwhelmed by Boyfriend’s gift to her: a diamond necklace. However, she loves Danny’s gift: a handmade bracelet. Kendall is not thinking straight. Must be the near-fatal head injury. In fact, she’s so screwed up she leaves the hospital. On crutches!

Quick note: There’s a great line here. When Boyfriend is listing off his accomplishments (and Kendall is getting away), he ends with, “Plus, I was smart enough to get out of the dot-com market before it crashed.” Give it up to Power Rangers: even in their worst seasons, they have some funny lines out of nowhere. 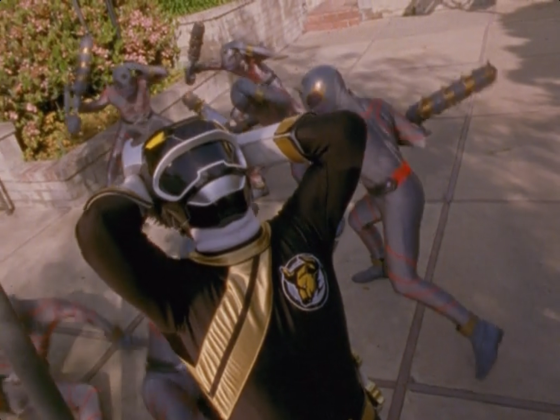 Danny is barely putting up a fight, he’s so lovesick, and Wedding Dress Org just beats the crap out of him. Luckily, Kendall comes out on crutches for him, giving him the strength to fight back! Meanwhile, Merrick, the Silver Ranger, heads to find the brides. 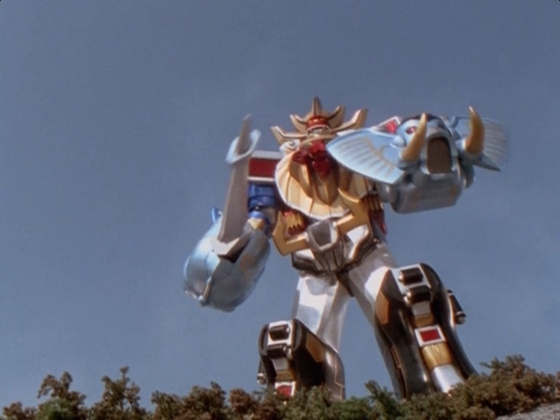 “My gift is my sooooonnnng.” – Wild Force Megazord Sword and Shield Mode (What? Zeo taught us Megazords are very musical.)

The Rangers fight and defeat a grown Wedding Dress Org with the Wild Force Megazord Sword and Shield Mode. One thing that did not suck about this season in the slightest was the number of Zords. There were so many! They were all so cool and customizable! I had so many of these toys back in the day. 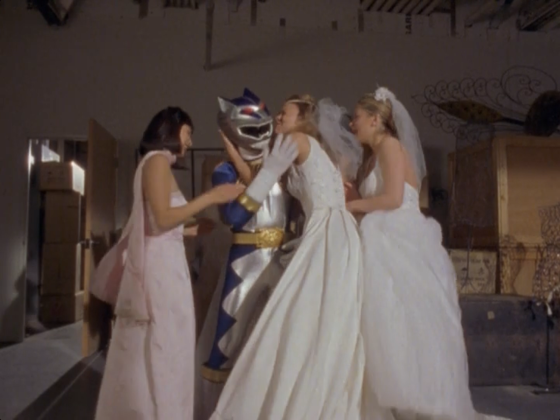 “Well, I’m not the kind of Ranger who’d usually barge in on a white veil occasion…” – Merrick

Hilariously, when Merrick saves the brides, they maul him with love. It’s one of the funnier things I’ve seen. Something about the expressionless Ranger helmet and the uncertainty of how to move his hands. It just really tickles me.

Back in the Moulin Rouge of Danny’s mind, Kendall breaks up with him to get him to focus on saving the Earth. Which, of course, she’s completely right about. But hey, she’s still wearing his bracelet! So that’s nice.

Analysis: Hoo boy. Wild Force sucks, let’s say that right out of the gate. There are charming things about episodes like these, but you can’t really get over the horrendous acting.

I’ll give the cast this: given better direction, they might have been fine. Showrunner Jonathan Tzachor was a huge fan of the Super Sentai series, and based almost all the season’s plots on its Japanese counterpart, Hyakujuu Sentai Gaoranger. He even had Sentai directors come over to direct episodes – including directors who couldn’t speak English!

It’s a shame, because in its best moments, Wild Force has something going for it. The Zords are just awesome, the plot introducing the Silver Ranger was one of the best Ranger introductions since Tommy’s in Mighty Morphin, and the cast (save Red Ranger Cole, Ricardo Medina Jr., who just really sucked) were pretty likable. Unfortunately, the creative issues – and reported behind-the-scenes tensions – kept Wild Force pretty limited.

Luckily, I loved our next series. The first to be shot after moving production to New Zealand (cost-cutting measure, naturally), it signaled some not great things for the franchise as a whole, but the season is funny and really well done. So I’m excited to take on Power Rangers Ninja Storm next week!

UP NEXT: Power Rangers Ninja Storm: “I Love Lothor” (Episode 20)

Small Power Rangers Project update: We’ve now reached the halfway point, and we’re rapidly approaching the point where I haven’t seen any of the upcoming seasons. (Past Dino Thunder, I’m clueless, though I’ve read some about Jungle Fury and RPM.) So I’m planning on doing Ninja Storm and Dino Thunder next week, then one a week past that point. I’m determined to get through Megaforce by the end of the fall, but I’ve heard some of these upcoming seasons are fatal. We’ll find out together, I guess?