Fresh from being signed to Mercury Records, John West is setting the electronic world on fire with his warm, familiar acoustic sound. The artist, who is appearing with Tamar this Wednesday at the Living Room, took time to talk to the Loyolan about loving his audiences, his dream collaborations and covering a Rihanna hit.

Kevin O’Keeffe: How did you come to play at LMU’s “Live in the Living Room” venue?

John West: I had a friend who does some college bookings. He lined this up as well, since it was in L.A. But I don’t go too deep with the LMU scene, since I never went there or anything.

KO: Did you know of Tamar, your fellow artist at this concert, previously?

JW: I haven’t specifically met her, but I look forward to meeting her.

KO: On the topic of other artists, I have to ask: Who would be your dream collaborator?

KO: You’re well-known for your interaction with the audience during a live performance. How do you adapt that to this college campus setting?

JW: The way I’ve built my fan base and my live performance technique, I’ve played on the streets as a performer. To some degree, when I play a room of people who aren’t going to walk past you a couple seconds later, it definitely takes the edge off. You’re always playing in front of strangers, but I don’t know. I don’t take it too seriously. It’s about having fun onstage and making sure the people around you are having fun too.

KO: What is the experience you want your fans to take away with them after a concert?

JW: The Dalai Lama has a great quote that’s something like, “I don’t want to be just inspiring; I want to be awe-inspiring.” If I can inspire people in a crowd, that’s the dream experience I would want them to take away from a concert of mine, whether their dream is being a musician or being the first in the family to get a college degree, anything.

KO: You’re also known for your acoustic cover of Rihanna’s “Umbrella.” What was your inspiration to take such a well-known song and turn it on its head?

JW: I just liked it a lot; it was such a great song. It’s what I like to call “dark pop”. When you cover a song, you definitely have a style that comes through whatever song you’re paying homage to. Sort of my spin on it, I was playing it how I felt it, which was a little slower and more focus on the lyrics.

KO: Would you say the tone and style of the “Umbrella” cover meshes well with your usual musical style?

JW: Yeah, I think my newer stuff is more up-tempo. Everything has sort of a laid-back feel, but yeah, I think it definitely fits.

KO: What do you think of being a recording artist in today’s constantly changing media world?

JW: It’s been challenging for an artist for the past 30 or 40 years because pop music is constantly evolving. Who’s the biggest artist in the world? Probably Lady Gaga, and similarly, everyone’s into these big dance songs. As an artist, the question is, do you attempt to fit that mold, or do you press on doing your own thing?

KO: But what specifically about today’s media makes it either more or less difficult?

JW: As a recording artist in 2006, you were probably in a rougher spot with the labels, so unaware of where things were going in media. But now, downloads and ringtones are just as important as selling records, and 100,000 records is a major hit now. For me, even without a record label, I’ve been able to be self-sufficient. I just think there’s a lot more power in an independent artist’s hands. 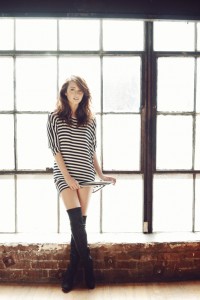 Tamar Kaprelian, usually known by her first name only, is headed to the Living Room on Wednesday for a show with John West. She took some time to talk to the Loyolan about anticipations of playing on a college campus, growing up wanting to be Billy Joel and why the digital movement in music is really an advantage for young up-and-coming artists.

Kevin O’Keeffe: How did you come to play at LMU’s “Live in the Living Room” venue?

Tamar Kaprelian: I was doing an event for this label called Cherrytree Records, and one of your event coordinators was there. She asked, “Would you like to play on our campus?” I said I would love to do it! After all, I’m in L.A., I’ve been to your campus many times. I actually almost went to LMU! And I haven’t actually played many college campuses – this is probably my first.

KO: What are you looking forward to most about playing a college campus?

TK: Definitely to see the reactions I’ll get from young people my age. I think my music caters to intellectuals, so I think it’s something the kids at LMU will really relate to.

KO: You just mentioned that your music caters to intellectuals. If you had to boil it down, how would one best describe your sound?

TK: Well, that’s a good question. You know, I’m definitely a singer/songwriter, and it’s definitely a pop record. But I grew up idolizing classic ’60s and ’70s songwriters. I basically grew up wanting to be Billy Joel. It’s not a vintage sound, but it definitely has throwback flair, at least a little bit.

KO: What was the one moment in your life when you knew music was your calling?

TK: According to my mom and my dad, I was singing before I was talking. It was something very innate to me. I just knew I was going to get into music, one way or another. It just really organically happened that way.

KO: You’re playing with John West at this event. Did you know of John West, your fellow artist at this concert, previously? Have you ever heard his music?

TK: We have definitely not met. And I haven’t heard his stuff either! I need to check him out!

KO: On the topic of other artists, who would be your dream collaborator?

TK: I think I’d go back and say Billy Joel again. He’s the reason I got into music, after all. Or Sting, maybe. For a more contemporary artist, I’d probably pick Alicia Keys. I think she’s really classy and her music is really beautiful.

KO: What is the experience you want your fans to take away with them after a concert?

KO: What would you say to someone who isn’t usually a fan of the singer/songwriter or pop genre of music to convince them to listen to your music?

TK: A good song is a good song, regardless of the genre. I think all people should have appreciation for that. It doesn’t matter if it’s hip-hop, country, even beat poetry… A beautiful piece of music can transcend all genres.

KO: Do you find that the constantly changing world of music, what with the influence of the Internet, YouTube, etc. is an advantage or disadvantage to up-and-coming artists?

TK: I’ve been doing this for eight years, and the music industry has changed three or four times. It’s always been difficult. But if your music is good, if it’s honest, people will hear it. Frankly, I think YouTube and the Internet are extremely useful for young artists, because in the past, artists would have to tour for years to build a fanbase. It’s gonna be interesting to see how a really big Facebook following will translate to record sales and people coming out to shows.