A sophomore finance major who once told the Loyolan that ASLMU was “what made me like LMU,” Dilekoglu was the only returning senator this year besides sophomore psychology major and Speaker of the Senate Ceci Rangel-Garcia.

Dilekoglu’s resignation comes on the heels of last night’s announcement from ASLMU that senior marketing major Bryan Ruiz would not be continuing as president.

“There are a lot of different elements that come into it,” Dilekoglu explained of his decision to resign. “The main thing is … the way they treated my friend and president, Bryan Ruiz.”

Dilekoglu described the University’s treatment of Ruiz as leaving a “bad taste” in his mouth.

Though Dilekoglu is a member of Sigma Alpha Epsilon (SAE), the same off-campus fraternity of which Ruiz is a member and was president of last semester, he said that his resignation has nothing to do with his personal relationship with Ruiz.

“It could have been anyone,” he said. “It was the way that person was treated, after doing everything for the University, but they treated him like a criminal.”

He is the second senator to resign this year, after junior finance major Michael Curran left his post in January. 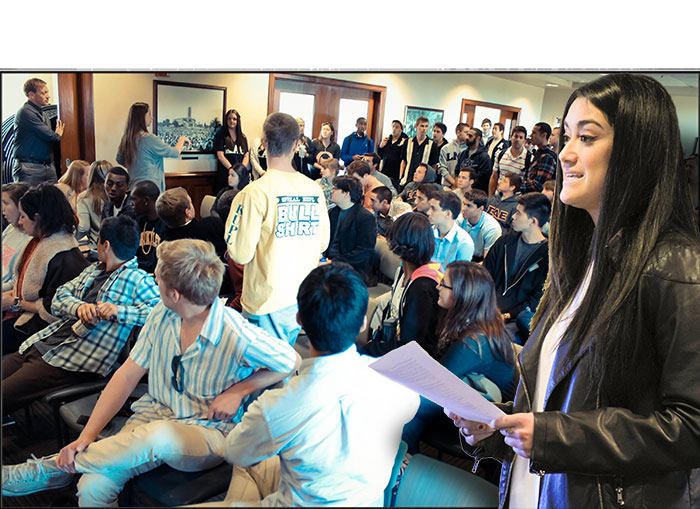 ASLMU Senate has accepted an impeachment complaint against ASLMU president and senior marketing major Bryan Ruiz submitted by Greek Council president and junior entrepreneurship major Lauren Coons on behalf of the Greek community. The Senate will move forward with a formal impeachment hearing next week.

During the regularly scheduled weekly Senate meeting, more than 100 students filled The Hill on the fourth floor of Malone Student Center to listen as Coons read the complaint. Coons detailed the multiple reasons why the Greek community felt Ruiz had violated his position, broken up into three separate grounds for impeachment.

The crux of the complaint concerned Ruiz’s attendance at an alleged Sigma Alpha Epsilon (SAE) recruitment event held on campus. SAE is an unrecognized fraternity based off campus, as first reported in the Nov. 12 Loyolan article “Unofficial fraternity colonizes off campus.” Ruiz’s presidency of the organization became a point of contention last fall, though no action was taken beyond a Senate meeting discussion.

According to the complaint, an anonymous statement from a new member of one of LMU’s registered fraternities claimed that those participating in recruitment for SAE were taken to a Foley Annex classroom for an alumni night – and that Ruiz was in attendance. During that meeting, according to Coons’ statement, Ruiz was expected to be at the First Amendment Week (FAW) keynote speech, an event co-sponsored by the Loyolan and ASLMU.

“I think when I heard it, I couldn’t believe it,” said Greek Adviser and Assistant Director of Student Leadership and Development (SLD) Dan Faill of the allegations. “Because that’s blatantly violating University policies.”

ASLMU Adviser and Assistant Director of SLD Alexandra Froehlich also mentioned the conflict in an interview with the Loyolan, saying, “I was disappointed, because that [FAW speech] is definitely an event that we all should have been supporting.”

Coons also pointed out that the funds used to co-sponsor the speaker were from Ruiz’s discretionary budget, information she said she obtained from the Feb. 6 ASLMU Senate meeting minutes. Froehlich verified this, saying, “[The money] came out of Bryan’s budget.”

The complaint accuses Ruiz of “conduct that violates the mission of ASLMU or the University,” identified in the ASLMU bylaws as grounds for impeachment. Froehlich said before the hearing that this charge could indeed be called an infraction of Ruiz’s position.

Ruiz, a member and former president of SAE, addressed the accusation preemptively in a statement about the impeachment complaint that was released on ASLMU’s Facebook page at approximately noon on Tuesday, then later taken down and reposted on Ruiz’s personal Facebook page. In the statement, Ruiz claimed that he was no longer SAE president at the time of the alumni night, saying, “The planning of the SAE event was an executive decision under the newly instilled president, [former SAE Vice President and senior accounting major] Nick Mecham.”

Though both Froehlich and Faill talked in interviews about SAE’s alleged illicit recruitment practices, including early bids, none of these issues beyond the alumni night were referenced in the complaint.

According to the ASLMU bylaws, any undergraduate student can file an impeachment complaint against a member of ASLMU. The complaint must be presented to the Senate with a list of possible witnesses, as well as a description of potential transgressions and the grounds for impeachment.

Senate must approve an impeachment complaint before it moves to the hearing stage. Despite his status as a member of SAE, Senator and sophomore accounting major Roy Dilekoglu was the first to motion to approve the complaint.

“I wasn’t surprised,” said sophomore psychology major and Speaker of the Senate Ceci Rangel-Garcia of Dilekoglu’s motion. “Because as Senate, we are here to hear any student concerns. It’s our job to hear everything, and that’s what the next meeting will be. He’s been a senator for two years, so he knows our regulations.”

The Senate motioned to commence impeachment proceedings before adjourning yesterday’s meeting. The impeachment hearing will be held during the next Senate meeting, during which the senators will hear testimony from witnesses called both by ASLMU and from a list crafted by Greek Council. As Speaker of the Senate, Rangel-Garcia will act as chair of the hearing.

“Everybody really needs to separate themselves from being really close with Bryan,” Rangel-Garcia said of any potential tension or bias between senators and Ruiz. “We just are really stressing to be as objective as possible. … We all respect each other, and we respect each others’ decisions.”

Two days before the meeting, in an interview with the Loyolan, Froehlich indicated that there were other “wheels in motion” that might’ve had an impact on the impeawchment efforts. Though she indicated that said wheels were not other impeachment or resignation efforts, she did indicate that they were “possibly” removal efforts. However, these efforts seemingly did not come to pass.