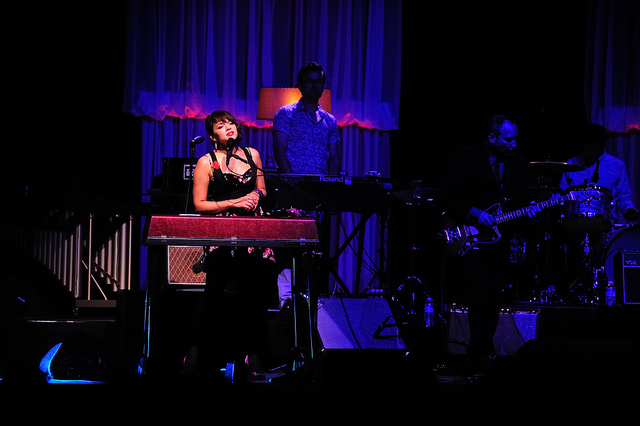 On her new album …Little Broken Hearts, folk singer and Texas sweetheart Norah Jones strikes a significantly darker tone than on her previous work. On the murder ballad “Miriam,” perhaps the darkest of all the tracks, she describes killing her lover’s mistress. As of this Wednesday, “Miriam” has an equally eerie video to match.

Jones’ new video, directed by Philip Andelman (and available exclusively at SPIN.com), is onelong shot across Lake Bastrop. The singer sits alone in the center of the lake in a boat, wearing a bright red dress, with a bloody oar by her side. The camera lingers on her as she sings, “I know he said it’s not your fault/But I don’t believe that’s true/I’ve punished him from ear to ear/Now I’ve saved the best for you.”

…Little Broken Hearts was written by Jones and her writing partner, Brian Burton, in the wake of a bad breakup. “Miriam” is the second-to-last track on the album and was praised by outlets like SPIN (“Jones has given her NPR-goody-goody image a bruising”) and the New York Daily News (“she sings with chilling relish”) as a highlight.

To promote …Little Broken Hearts and the video, Jones will be appearing on Conan next Monday to perform “Miriam,” as well as on The Tonight Show with Jay Leno on August 13 to perform “Say Goodbye,” another cut from the album. She is also preparing to embark on the second part of her U.S. tour starting next Tuesday. She’ll be appearing in Austin on October 19 at the ACL Moody Theatre, as well as in Houston at the Bayou Music Center on October 20 and the McFarlin Auditorium in Dallas on October 22.

Matthew Feldman is a self-confessed multitasker, a skill he put to the test when he decided to combine his love of juggling and his passion for running.

“I enjoy doing both of them, and doing both takes a lot of time,” Feldman said in the above video. “So I put them together.”

This past Friday, Feldman, a Rice University researcher in nanomaterials and University of Florida student, broke the Guiness world record for the fastest mile while juggling five objects with a time of 6 minutes and 33 seconds. Previously, the record had been 7 minutes and 41 seconds, set 23 years ago by Bill Gellen.

“6:33 isn’t my personal best time,” said Feldman, who claims his best personal time is 6:27. “But I feel good about getting the attempt done and obtaining the record.”

Feldman’s joggling, which is part of his everyday routine, is also part of his campaign to raise money for tsunami-ravaged Isatomae in Japan. In March of last year, Japan was hit by a devastating tsunami, and according to Feldman’s website, the citizens of Isatomae are still suffering.

“The lack of morale, motivation, and manpower in the town has prevented residents from being able to rebuild much of what was destroyed,” Feldman wrote. So he set about promoting the world record attempt and encouraging donations for the people of Isatomae, an area he had visited earlier this summer. His efforts have so far have raised just under a fifth of his goal of $2,500.

“Every cause needs publicity, and I’m hoping that this record attempt will give me the publicity I need to raise awareness for the residents in Japan,” Feldman said.

Watch him perform this feat in the below: 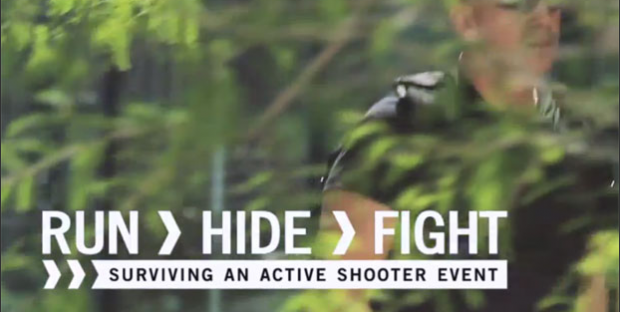 The Aurora movie theater shooting continues to haunt the nation. And three days after the rampage, the Office of Houston Mayor Annise Parker put out a bizarre-but-helpful PSA that the office had apparently had in the can for a moment such as this.

The video was commissioned in January of this year, according to Jessica Michan, Annise Parker’s press secretary. While the PSA was “finished about two to three weeks before the Colorado incident … we held it until it became relevant,” Michan told the TM Daily Post. Thus, the video was released on July 23, three days after the shooting spree.

The six-minute video, which has been viewed over a hundred thousand times on YouTube, is titled “RUN. HIDE. FIGHT. Surviving an Active Shooter Event.” It was produced in part with a grant from the Department of Homeland Security and boils down surviving a shooting into three simple plans of action: running, hiding, and fighting.

“It may feel like just another day at the office,” the voiceover intones over footage of a shooter dressed in all black walking into a workspace. “But occasionally, life feels more like an action movie than reality.”

The video then proceeds to detail the steps you need to take to survive, with summaries breaking down the plans at the end of every section.

“Our thoughts and prayers are with the victims of Aurora’s tragic shooting,” said Mayor Annise Parker in a July 26 press release. “I can’t imagine the horror and grief. If it is at all possible for any good to come out of it, perhaps it can be letting people know the options to consider if it happens again.”

Though the PSA contains some useful tips, the Internet does not seem sure what to make of it. A blogger at HyperVocal, who found the video something to “squirm through,” opined that “[i]t’s helpful, but the cheesy voiceover (‘Sometimes bad people do bad things’) and thinly veiled references to a certain ‘action movie’ make watching it pretty uncomfortable.” Daily Intel’s Dan Amira dubbed the PSA “pretty intense” and noted that it “does seem like well-timed advice.” And it led BuzzFeed to wonder, “Was this video made for eight year-olds?”

The press release urges citizens to take action, repeating the refrain of “If you see something, say something.”

“We hope our residents are never confronted with such an event,” said Dennis J. Storemski, Director of the Mayor’s Office of Public Safety and Homeland Security in the release. “But we want to prepare them with some of the important information if they ever find themselves in this situation.”