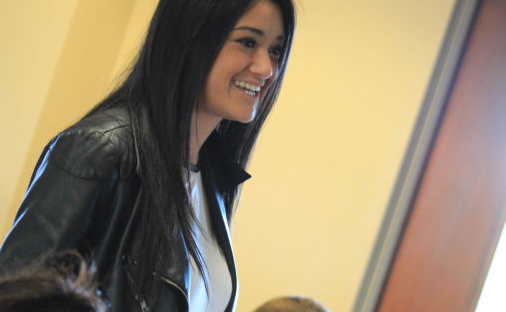 Before she walked into the Feb. 20 ASLMU Senate meeting, Greek Council President Lauren Coons was not spending her time rehearsing the impeachment complaint against then-ASLMU President Bryan Ruiz she would be submitting. Instead, the junior entrepreneurship major was in class.

“Trying to sit through class, knowing that I would be making this huge movement, this splash in the community … I was nervous,” Coons said of the time prior to the hearing. “I still can’t believe that I did it, to be honest.”

When Coons’ class ended and she entered the meeting, she found herself speaking to an audience of over 100 students, all collected to watch history being made.

“You don’t speak in front of 100-plus people every day,” Coons said of her anxiety in the moment. “Nor do you go against the current every day.”

The genesis of the complaint

After being elected to the presidency of Greek Council in December, Coons spent much of her time and energy post-recruitment season researching the events of an alleged Feb. 5 on-campus meeting of Sigma Alpha Epsilon (SAE), the off-campus, unrecognized fraternity of which Ruiz was formerly the president and is currently a member. According to Coons’ complaint, the meeting was an SAE alumni night held in a Foley Annex classroom. Sanctions received due to this meeting ultimately led to Ruiz’s removal by the University, according to a post on Ruiz’s personal blog on Tuesday.

According to Coons, rumors of the meeting first surfaced at a Greek leadership summit. As chapter presidents expressed frustration that issues with SAE were not resolved when they first surfaced last fall (as reported in the Nov. 12 Loyolan article “Unofficial fraternity colonizes off-campus”), Coons said she felt “a little bit” of a personal obligation as Greek Council president to take charge of the process.

“I think the presidents took it personally that nothing had been done, and that SAE chose not to listen,” Coons said. “I had full support from them from the beginning. So this was not something just coming from me. … I made sure I was representing the Greek community.”

Despite rumors to the contrary, Coons said the complaint was entirely student-motivated, with no interference from the University. “I know there’s been a lot of speculation and some wisecracks made about the administration and puppeteers,” she said. “But I wrote [the complaint] myself.”

‘It seemed to deeply impact her’

All this preparation led Coons to stand in front of the Senate to present the eight-page complaint. Rather than merely read the text, Coons said she aimed to “engage” the students through an emotional presentation. This emotion led to a moment where Coons began to cry.”

“My initial reaction to her emotion was certainly, from a student leadership standpoint, to see how passionate she was about what she was speaking about,” Niemi said of Coons’ tears. “It seemed to deeply impact her.”

Greek Life Program Coordinator Dan Faill agreed. “Yes, she got emotional,” he said to the Loyolan after the meeting. “However, given the level of work and investment she had with the matter, I am proud of how well she did.”

“It was a long week. A lot of work went into it,” Coons said. “I think part of it was stress coming out finally.”

After the meeting concluded, Coons’ complaint quickly and sharply divided LMU’s student body, as comments on both ASLMU’s and the Loyolan’s Facebook pages quickly escalated into full-scale debates about the validity of the charges

“It sucks,” Coons said. “We’re a very small community, and we shouldn’t be so divided. I hate that it came off as the Greek community versus ASLMU.”

Still, she noted, “It’s interesting to see how passionate students get. … Students have a voice. Clearly, they do. As much as it sucks that they’re divided, it’s kind of cool to see that happen, to see how students react and get involved with this stuff. They’re passionate.”

However, one of Coons’ regrets about the division in the student body is how the saga has been perceived as a fight over power. “I think this got heated really quickly, and I kind of forgot, too, that we are students and we are one community,” she said. “I wish it wasn’t depicted as such a power struggle or a battle against these two communities, because we’re one community.”

One person who firmly believes that it was a battle is former ASLMU Senator and sophomore finance major Roy Dilekoglu. “It’s one big power struggle. They like to argue that ‘one in four people are Greek life.’ Well, three in four people aren’t Greek life,” he said. “[My] perspective … is that it has nothing to do with ASLMU. It’s just the power.”

However, Faill doesn’t believe that Coons had power in mind. “With Lauren, this has never been about power, even when she first brought it up,” Faill said. “This is and has always been about integrity and doing the right thing.”

The day after the meeting, Ruiz was removed from office. Because of this, the impeachment hearing Coons petitioned for was never held.

“I was a little angry, just because of how much work I put in,” Coons said of the University’s decision. “[But] it also was bittersweet. It was a lot of work, and for Bryan’s sake, that would have been terrible to drag it out for another three weeks with spring break. And on my end, it was a lot of work that I didn’t have to do.”

Ultimately, Coons said, it was time to move on. “I just kind of let it go. Book’s done. Chapter’s done,” she said.

While Ruiz is no longer president, SAE remains active off campus, something that Niemi said is still an issue for Greek Life. “My understanding is that there … are others that share the sentiment from an organizational standpoint,” she said. “And I can imagine that Greek Life will continue to have that as a subject of discussion internally.”

“SAE as an organization has some work to do. And we as an LMU Greek community hold our organizations to a high standard,” Coons said. She did allow for the possibility of SAE returning to campus during a future expansion process, however.

Looking back, Coons said that while she does have some regrets as to how things proceeded, she remains steadfast that her impeachment complaint was valid and glad she went through with the process.

“I’d do it differently,” Coons said. “I’m not sure how, but there are definitely changes that I would make.”

She then added, “But I would do it again.”