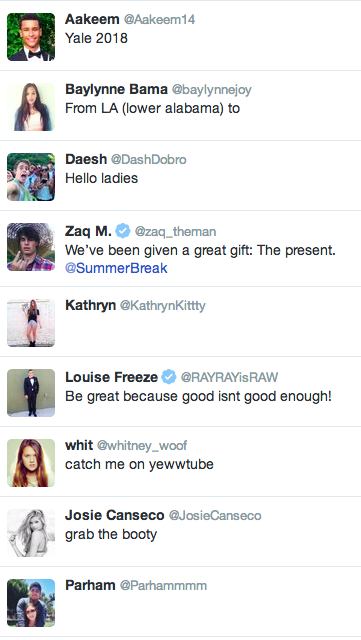 You’re working on catching up with @SummerBreak, right? Season 2 is mere days away, and yet the cast has yet to be announced. The production team has had their casting weekend, and if they’re following the format from last year, they have to have already shot much of their pre-summer prologue. So the cast is set, and if social media trends are any indication, we can be confident that said group will be made up of the names you see here.

There are a couple of pretty easy tells when looking for cast members, first and foremost being that they’ll all be followed by producer Billy Parks. However, unlike other teenagers Parks has followed recently, eight of these nine have also hashtagged their recent Instagram photos with #MySummerBreak and #SummerBreakWith____ (the blank being filled with their name). The season 1 cast did the same before their episodes were posted. It creates content for the audience to consume the second the cast is announced, rather than waiting for the YouTube installments to kick into high gear. Admittedly, this is pure conjecture, but it’s reasoned conjecture, and I’d be shocked if eight of these nine aren’t part of the cast come announcement.

So who’s the ninth? Why, that’d be season 1 cast member Zaq. Strangely, despite tweeting about the show, Zaq hasn’t been labeling any Instagram photos with the appropriate hashtags, yet fellow season 1 player Ray is. Even more intriguingly, Zaq appears to be under contract with Wilhelmina Models. My bet: Zaq’s still in it. That may be anti-wishful thinking – my hope was that they’d bring back Ray and not Zaq – but we’ll see.

Among the other seven, you’ll see at least one familiar face: Whitney! Season 1’s breakout supporting star looks to be returning full-time for season 2. Of the newbies, Josie has the most inconspicuous last name (yes, she is Jose Canseco’s daughter), but I’m placing my bet for breakout star on Dash. He’s a young actor who’s already been in Modern Family and Children’s Hospital, and he seems to have the biggest personality.

UPDATE: The show’s Tumblr has been updated with the full cast list. All nine mentioned above are in the cast, plus a tenth (one more than the show’s original cast last year). The tenth is Jacob, found on Twitter here and Instagram here.

Still need to catch up on @SummerBreak? Watch the season 1 essential cut below, and follow @kevinpokeeffe for more updates.